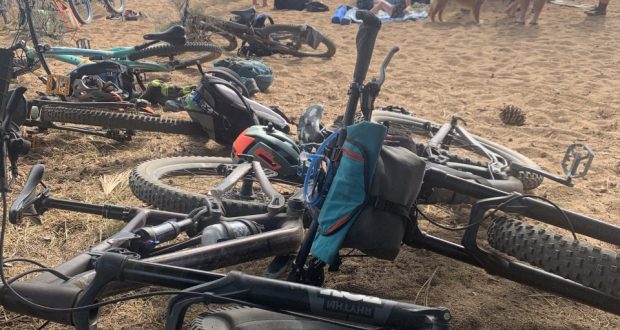 A RIDE TO STOP THE MINDEN SIREN

Switchback after switchback, the trail climbs continuously as it snakes its way up Sierra Canyon. It’s hot and dry in the desert. The riparian greenery around a nearby creek offers brief reprieves of shade. The climbing feels endless, most likely because it’s my first real mountain bike ride in months, or even more likely because I’m going the wrong way on a classic downhill ride for over 4k+ vertical feet.

Thankfully, I’m not alone, and the camaraderie within the group is powerful enough to make the arduous effort feel like I’m going the right way as there is a deeper purpose attached to this ride. The pedaling remains ruthless for hours, but I knew that would be the case when I chose to sign up for the Riders Against Racism ride that took place in Minden, NV on May 29, 2021. It was my choice to join the ride and protest that day, just as it remains a choice for the town of Minden to continue to blare its sundown siren every evening at 6pm.

The Minden sundown law became a reality on April 5, 1917 when a town ordinance went into effect requiring all Native people to “leave and be out of the town limits of Gardnerville and Minden by the hour of 6:30 o’clock P.M., of each and every day.” The siren would go off to support the ordinance and served as a daily reminder that Native people in the area were treated differently simply because they were Indigenous. The ordinance was crafted by white settler-colonialists who established Minden in 1905 with a vision of a European inspired community that would be organized around a town square, the Minden Park.

Previous: EXPLORING SKIING’S ORIGINS A HALF A WORLD AWAY WITH FLYLOW
Next: Show Reviews & Photos | Phish at the Gorge and Shoreline| Glide Magazine

THE SURPRISING THINGS I ALWAYS BRING INTO THE BACKCOUNTRY| FLYLOW