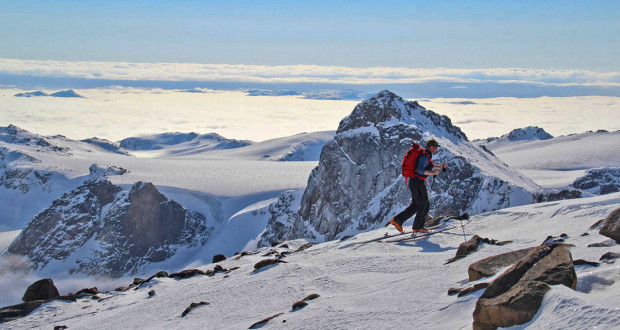 This past April I was fortunate to share in one of the most standout ski expeditions I have ever experienced. The following is a fabulous piece written by writer/guide/photographer/athlete Kim Havell. If you’re interested in skiing in Greenland we’ll be going back with Ice Axe Expeditions next April. Check this page out for more details or get in touch with me via my contact page and I’d be more than happy to fill you on all the details.

Our plane crossed the Arctic Ocean and dipped down towards the Davis Strait. Banking a sweeping right turn towards the short runway, cut between big cliffs and ocean, we got our first glimpse of the minimalist oceanside town of Sisimuit, Greenland. Sisimuit, and most of Greenland, is north of the 60-degree line that traditionally defines the northern polar region. The ruby-red Air Greenland turboprop plane halted at the house-sized airport and, from our seats, we had a window view of five couloirs straight down to the water. The ski terrain and conditions looked promising.

Greenland is an autonomous country within the Kingdom of Denmark, located between the Arctic and Atlantic Oceans, east of the Canadian Arctic Archipelago. It’s notable to skiers for its proximity to Baffin Island, a couloir mecca of the Northern hemisphere. We had come to Greenland in April to explore the ski potential of Sisimuit-based expeditions and to establish routes in new areas. As guides and representatives of Tahoe-based Ice Axe Expeditions, our team of ski pros included Sierra guides Glen Poulson and Brennan Lagasse, and Jackson Hole ski patroller Peter Linn.

Previous: The Future Of The Backcountry Is In Your Hands | Help Make A Difference
Next: Come Ski The Indian Himalaya With Me And The Adventure Project In February 2015