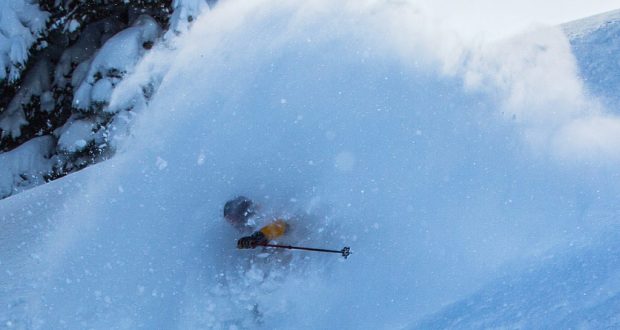 This piece was written for the late winter edition of Ascent Backcountry Snow Journal. You can find the issue in quality gear shops across the American West.

I inch my way down California Hwy 89 towards my house on Tahoe’s West Shore. “I wonder how buried the A-Frame is?” is all that is spoken between Jillian Raymond and I as we collectively take in the growth of the local snowbanks littered along the road since we left town for a brief trip. We knew we were going to miss a storm, but we didn’t think it was going to hit like it did. It’s sort of a microcosm for what many residents and visitors to Lake Tahoe felt last season. After several drought years followed by an average winter in 2015-2016 it seemed many people forgot what a banger winter is like in the Sierra.

When we arrive to our driveway we found 2-3 feet of new snow. I instinctively paused. But being tired from travel, and quasi-alarmed that we couldn’t see our front door, I impulsively punched the gas thrusting our truck into the immovable sea of white. It was late enough that we both just wanted to get in the door and find our bed for some much needed rest. I jumped out of the truck and plunged up to my thighs in fresh, cold powder. The wallowing that followed was real. Normally, the task of parking and walking in the front door would take a matter of seconds to complete. This time was different. I could barely see my neighbors house. Snow was falling hard enough that the one streetlight we have was barely glowing. The trees in our front yard were blanketed so thickly it almost looked like there wasn’t a house here at all.

I took big steps to pull each foot out of the postholes I had created to get enough momentum for the next move as I navigated the peculiar depth of my driveway. When I reached the four steps that lead to our front deck, I had to kick foot placements in as if I was putting in an actual boot-pack. Once on the deck, I literally had to climb up, to eventually slide down the backside of the snow pile that had developed since we left town just a few days earlier to get to the front door. In 15 years of Tahoe living I have witnessed some amazing storms, but I never had to enter my own home as if I were attempting to access a buried backcountry hut. A shovel would have helped. Actually, verts might have been the most useful tool given the severity of the situation.

Previous: Mammoth Adventure Series| February 15| A Night for the Arctic Refuge
Next: A PIRATE’S BOUNTY- SKIING AND SAILING IN ICELAND’S HORNSTRANDIR NATURE RESERVE