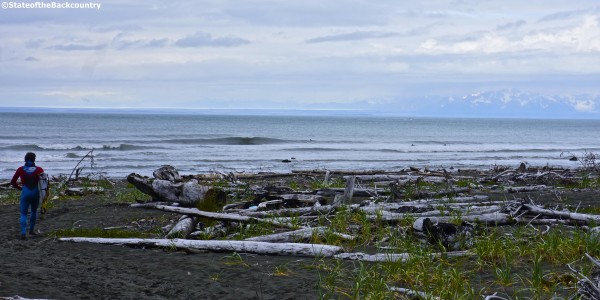 I LOVE Alaska. In my opinion, when it’s on, there’s no where else on planet earth that delivers such incredible skiing. But there’s more to the land of the midnight sun than the best skiing in the world. I’m currently processing another incredible trip to Alaska, this time with a visit to Kodiak Island to surf, with a return trip to the Arctic National Wildlife Refuge to work with the Gwich’in Tribe. However, last summer was my first trip to surf in Alaska, a trip to Yakutat. The following speaks to an off the beaten path surf trip like no other. Enjoy!

What comes to mind when you hear, “Alaska”? Whatever it is-wilderness, bears, mountains-it’s probably not surf. The thing is, whether you’re looking for monster swells in winter, or want to surf warmer water than NorCal, Oregon, and Washington in the summer, Yakutat has it covered. The small, quaint Alaskan fishing town is home to less than a thousand people, but is arguably home to the highest concentration of quality surf breaks in a state that also holds the most coastline in all of the U.S.

When Surfer magazine offered a cover photo from Yakutat back in 1993 the surfing community took notice. With Jack Endicott establishing Icy Waves in 1999, and CBS news covering the first surf shop in the state, “Surf City, Alaska” was born. Icy Waves is impressive. It’s a fully stocked surf shop with everything a visitor needs to be outfitted for a surfing adventure in Yakutat. It’s actually not as difficult as many might think to have a worthy surf trip to the great white north. There’s a few ways of going about making the adventure happen. Here’s a few tips:

Previous: Summer Dreams and Looking Back on the 2013-2014 Ski Season with Mountain Hardwear
Next: Behind The Lens | Select Photos From Around the World