Home / Uncategorized / Two Days to Remember in the High Sierra 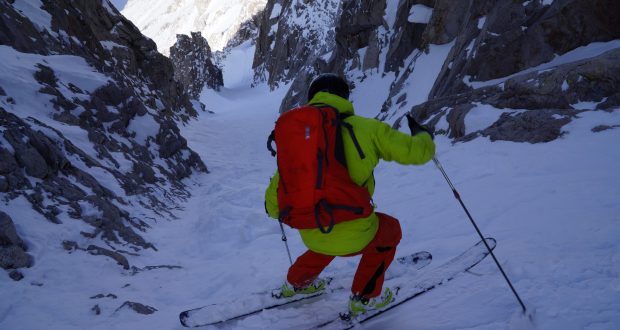 Two Days to Remember in the High Sierra

The ski season has started off slow in the Sierra, especially considering our monumental Winter that was last year. This piece was published in the early Winter edition of Ascent Backcountry Snow Journal. It recounts two of my favorite ski days from last season, which ended up taking place on back-to-back days. The story speaks to the winter that was in the Sierra, how insanely good it can get in the Range of Light, and the joy of nailing it in one’s home range. Patience is in fact a virtue. Enjoy!

Last season I completed five ski expeditions: Antarctica in November, the Arctic National Wildlife Refuge in February, the Chugach in March, Greenland in April, and the Himalaya in June. Each were noteworthy trips in their own right, but when I look back at the season all I can think about is the synchronicity of two days in my home range of the Sierra Nevada.

“Living the dream.” I’ve heard it before, and you’ve heard it too. It’s a cornerstone ski town phrase reserved for the ski bums that pull it off-it being the dream lifestyle. It doesn’t necessarily have to be any one thing. The dream lifestyle differs for each of us as we’re each unique beings. But I’m willing to venture that there are a few things that overlap in this so-called dream existence. One is being able to ski every powder day throughout a given season. Seems fair, right? I know there are some groomer lovers out there, but they’re probably not reading Ascent.

Another one is travel. I think some would take more, some perhaps less, but part of the dream is to see the world as a skier. Show up in a new to you part of the world, exchange pleasantries on a cultural level, hopefully attain that thing I mentioned first and foremost (skiing powder), maybe even ride a first descent. Well, as much as travel is a part of the dream equation there’s something to be said about nailing it at home.

Unless you were completely unplugged from the North American winter last season you too know that much of Western Canada and the American West had banner snow seasons. It seemed week after week, storm after storm kept coming to one region or another. The Sierra Nevada did not miss out. Although technically the 2010-2011 season counted more inches in terms of actual accumulation, the way certain features filled in last season in the Sierra was a phenomena not experienced in many, many years.

Read the rest at AscentBackcountry.com

Previous: Exploratory Ski Touring in the Himalaya
Next: Tahoe Ski Guiding with NASTC