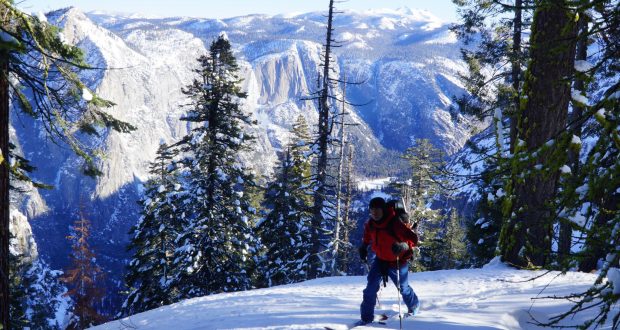 We’re skinning in puffys. Temperatures hover around zero. With headlamps lighting our way, it’s one of those mornings where as palpable as the excitement for the day is, we’re still far enough away from our objective to keep quiet in the skin track and stay on the move. I know what lies ahead even though I’ve yet to experience it in person. It’s a dream I’ve had for years, one that is shared with my other three partners for the day. I’ve imagined it in my mind so many times it almost seems like I’ve been here before. And truthfully, I have visited Yosemite National Park many times, just never during a time when there was actually enough snow to ski to the floor of Yosemite Valley.

The previous night Dave Campbell and I had made it to Yosemite about an hour before sunset. Dave is no stranger to Yosemite, especially the steep granite crags and walls that call to climbers around the world making it arguably the international epicenter of rock climbing. Yosemite is also one of the most visited natural attractions in our country, a National Park that averages around 4 million visitors annually. It’s an area revered many times over for its ecological majesty and the incredible access the Park provides for anyone willing to make a visit. One of the many special spectacles in Yosemite is the “Firefall,” and as much as Dave I weren’t necessarily visiting the park to catch the fleeting phenomenon, it looked as though we might be in the right place at the right time to catch it on this trip. I’ve taken a few memorable photos in my life, many of which have taken place in Yosemite National Park. This one of the elusive “Firefall” the night before our valley ski mission will always be a favorite.

Running through awkward snowdrifts trying not fall, I found myself bobbing and weaving through the crowd, looking up at what appeared to be a continuous stream of electrified lava pouring off of El Cap. It’s a place so revered and rightly so, with postcard views in abundance everywhere one looks, this was an unforgettable, fleeting moment of sheer natural beauty. Being here for this one moment in time was worth any effort it took to experience it in person. As the glow faded into a pink alpenglow I caught a glimpse of Dave, smiling as if he just finished another climbing route on El Cap. The look was one that was clear in its sincerity. What we just saw was special, and we nailed it. But seeing Dave also reminded me that we hadn’t actually come to Yosemite to see the Firefall, and we should probably get back to our car. We had our other two friends to meet and a big mission planned for the following day. We were here to ski, after all.

This was one of my all-time favorite ski days, realized in the heart of Yosemite Valley. Read the rest of the story here and please consider a subscription to Ascent if you enjoy the epic photos, stories, and stoke that comes along with supporting this small, grassroots backcountry skiing magazine that could surely use your support during this difficult time. Thank You!